Aniello obtained a Masters degree in Chemistry at the Università di Napoli Federico II in 2005. He was subsequently awarded a STMicroelectronics fellowship by the Università di Napoli Federico II which focused on the preparation of non-volatile memories. In September 2006, he joined Prof Donal O’Shea’s group in the Centre for Synthesis and Chemical Biology at University College Dublin to commence his PhD entitled “Synthesis and Application of New Infra-Red Fluorophores”. After completing his PhD, he moved to London in January 2011 and began working as a postdoctoral researcher in Prof Anthony Barrett’s (FRS, FMEDSCI) group in Imperial College London. During this time, he worked on a medicinal chemistry project involving the synthesis of cyclin-dependent kinase inhibitors and also developed new methodologies to access poly-beta-keto esters. In January 2015, he joined Prof Oren Scherman’s research group in the Melville Laboratory for Polymer Synthesis at the University of Cambridge. His research projects focused on the synthesis of supramolecular polymers, supramolecular sensors and on the development of supramolecular catalysts. In August 2017 Aniello joined the School of Physical Sciences at the University of Kent as a Lecturer in Organic Chemistry.

Kushal completed his Master degree in chemistry with Inorganic Chemistry specialization from University of Calcutta in 2010. He joined in Bioinorganic Laboratory of Indian Institute of Technology (IIT) Bombay to pursue PhD in Calixarene chemistry. He completed his doctoral dissertation titled ‘Bi-functional Calix[4]arene Conjugates: A Versatile Platform for Ion & Molecular Recognition in Solution as well as on Surface’, under the supervision of Prof. C. P. Rao in IIT Bombay in 2016. In 2017, he joined Tianjin University as a postdoctoral scholar, in the group of Prof. Han Zuilhof and Dr. Andrew C. –H. Sue to explore various facets of rim-differentiated Pillar[5]arene chemistry and small molecular Cholera Toxin inhibitor. In the year 2018, he was awarded SAFEA grant for outstanding Postdocs by Government of China and allocated a funding to conduct research in an overseas university. During his tenure in Tianjin University, China and Wageningen University, Netherland, he contributed in various synthetic projects, particularly in synthesis and host-guest properties of new macrocycles, derived from classical Pillar[5]arene. Kushal joined Palma group on February, 2021 as a Postdoctoral research associate to explore the supramolecular responsive properties of Polyproline helices. In his free time, Kushal likes to play all sort of racquet games and read books.

Athina obtained her BSc in Chemistry at the National and Kapodistrian University of Athens in 2016, and implemented her research project tilted ‘Synthesis of Morita-Baylis-Hillman derivatives’. During her MSc in Biological Chemistry in 2017 at Cardiff University, she completed her dissertation concerning the ‘Synthesis of DNA binders for biosensors’, under the supervision of Dr Niklaas Buurma. Following that, she took part in an internship at the National Center for Scientific Research ‘Demokritos’ focusing on the synthesis, analysis and biological evaluation of novel of radiolabeled pharmaceutical compounds. Athina joined us as a PhD candidate in the summer of 2018. Her project involves the rational design, synthesis and characterization of small organic molecules with applications in supramolecular organic and medicinal chemistry, as well as in responsive nanomaterials and in biomedical sciences. She also obtained a degree in piano performance and theory of music, and during her free time, she enjoys teaching music and participating in music concerts.

Dominic completed his bachelor’s degree in Chemistry at the University of Kent in 2018 and went on to complete a Master’s research project within the Palma group with the goal of designing and synthesising a new class of multi-facial alpha-helix mimetics based on non-natural amino acids with applications in Medicinal Chemistry. He has since re-joined the group in 2020 as a PhD research student, after working in the organics department of an environmental testing laboratory, and his current project is targeted at the design and synthesis of novel supramolecular bioinspired and highly tuneable, responsive materials, with immense potential in the fields of drug delivery, asymmetric catalysis, sensors and generally, in the formation of 3D and 2D biocompatible materials.

Elliott obtained a First Class BSc in Chemistry from the University of Kent in 2020, picking up awards from the Royal Society of Chemistry during his third year studies for his research project work, titled “Di-arylimidazolium salt formation via the copper catalyzed addition of aryldiazonium tetrafluoroborates to imidazole” whilst under the supervision of Dr Ewan Clark. He is now undertaking a MSc qualification and is focusing his research toward the synthesis and development of alpha-helix mimetic compounds; specifically making use of fucntionalised, non-natural amino acids in an attempt to mimic key biological proteins and their interactions. His work aims to develop applications in the field of medicinal chemistry. Elliott enjoys participating in a range of activities in his free time; from drinking beer and playing guitar and trumpet, to walking, golf and triathlons.

In 2020 Julija graduated with a BSc in Chemistry from the University of Kent where she completed a third year research project titled “Synthesis of bio-related monomers suitable for ring-opening metathesis polymerisation approach” under the supervision of Dr Stefano Biagini. In September 2020 she joined the Palma group to work on a master’s research project in design and synthesis of smart functional synthetic proline-derived polypeptide chains that can act as stereodivergent organocatalysts. This topic has wide potential application in biomedicinal chemistry. In her free time, she enjoys studying languages, psychology and travelling. 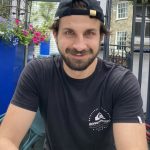 In 2018, Kieran joined the University of Kent aiming to complete an MSc in Chemistry. Throughout his study he has maintained a First-Class classification, with a key project being a literature review titled “Are Metal Organic Frameworks the End of Chemical Warfare Agents? A Review of Current Research and Potential Future Applications of MOFs”. Following this, he was awarded a research bursary from the Royal Society of Chemistry to complete an 8-week project into the application of layers of cationic guar gum and cellulose nanocrystals onto paper food trays, under the supervision of Dr Robert Barker. In September 2021 he joined the Palma group to complete a master’s project investigating the design, synthesis and characterisation of novel supramolecular constructs, focusing on proline. In his spare time, Kieran enjoys baking as well as training and competing in a variety of sports, primarily, Brazilian Jiu Jitsu and kickboxing.